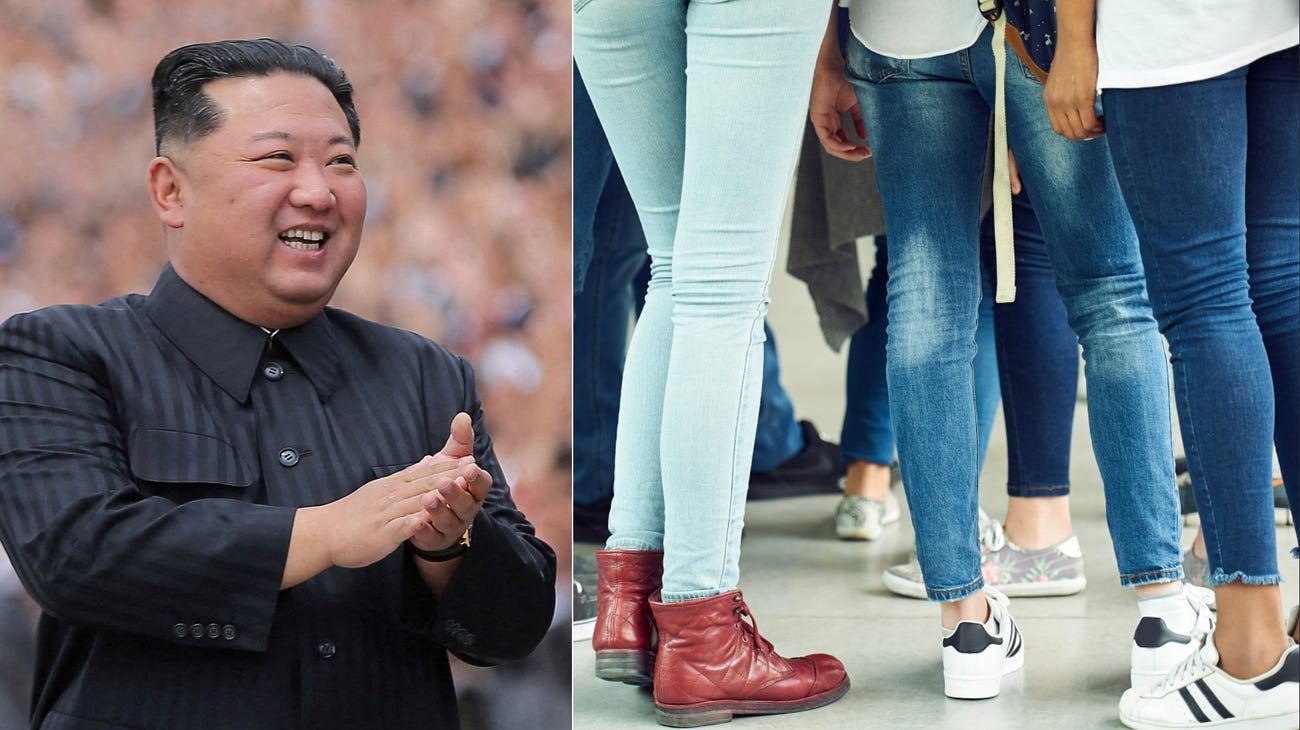 According to sources in North Korea, the country’s crackdown on tight jeans, dyed hair, and other “capitalist flair” fashions has intensified.

According to the US non-profit news organization, the country’s Socialist Patriotic Youth League is specifically targeting women in their 20s and 30s.

“The youth league’s patrols are cracking down on young people who wear their hair down to their waists and colour it brown, as well as people who wear clothing with large foreign letters and ladies who wear tight jeans,” a source told the site.

If they are apprehended, they must wait on the side of the road until the patrols have completed their search. Then they’ll be taken to the Youth League office, where they’ll have to “confess” their misdeeds in writing. According to the source, offenders are only released once someone offers them “appropriate” clothing to wear.

North Korea has banned piercings, skinny jeans, and hairstyles, including mullets, since last May, in a bid to keep the country free from “decadent” Western fashion trends. It came after the country’s leader Kim Jong Un described foreign speech, hairstyles, and clothes as “dangerous poisons,” per BBC.

Those who are spotted wearing styles showing “capitalist flair” outdoors are forced to wait on the side of the road until a youth patrol is finished searching the area for other violators.

All the offenders are then taken to the Youth League’s office, where they must confess their crimes in writing, according to the report. They can only be released to their homes if someone brings them more appropriate clothing.

RFA’s anonymous source said the stepped-up crusade against Western trends was announced last month during a nationwide educational session, at which Youth League officials said that wearing clothes and hair like people in capitalist countries was in violation of North Korea’s socialist practices.

North Korea first announced a crackdown on skinny jeans, piercings and certain hairstyles, including mullets, a year ago after Kim slammed foreign style and speech as “dangerous poisons,” according to a BBC report at the time.

The Youth League has since redoubled its efforts to weed out people imitating foreign fashions and customs.

Patrols in the city of Chongjin have been targeting a local marketplace known as a popular hangout spot for young people, according to another source who spoke to RFA on condition of anonymity.

If youths there are caught doing anything forbidden, their employers will be notified of their violation.

“They are then subject to criticism, and in the most severe cases, the violator’s name, home address and workplace will be revealed publicly on the Third Broadcast,” the source told RFA, referring to government-controlled loudspeakers placed throughout the country to spread propaganda.

But the source added that despite the punishments, North Koreans “do not stop trying to look and dress like people in foreign films and TV.”

The Youth League has recently scaled up its efforts in the crackdown, according to RFA’s source. Last month, members of the state-run youth organization held a nationwide “educational session,” defining the act of imitating foreign fashion and hairstyles as “capitalist flair,” the source added.

Another unnamed source told RFA that patrols targeted a marketplace popular with many young people. Anyone caught is reported to their employer, she said.

“In the most severe cases, the violator’s name, home address, and workplace will be revealed publicly on the Third Broadcast,” the source said, referring to the state-controlled loudspeakers that spread propaganda across the country.

“Even though they have these kinds of crackdowns all the time, the young people do not stop trying to look and dress like people in foreign films and TV,” she added.