Largest animal in the world is found in the Swiss Alps

A 200-million-year-old sea monster lived in a period when dinosaurs ruled the Earth; creature inhabited the oceans, but was found on top of a mountain
The world’s largest animal has been found in the Swiss Alps (Getty Images/FABRICE COFFRINI/AFP via Getty Images)

Fossils of ichthyosaurs, which lived 200 million years ago, found in the Swiss Alps should displace everything discovered to date regarding the world’s largest animals . According to the researchers, part of the spine is about 15 meters long. In one of the skeletons, a tooth six centimeters wide and 15 centimeters long was found, which suggests that it was a voracious animal, according to the researchers.

“The tooth is particularly interesting because it may represent the largest animal that ever lived on Earth,” said paleontologist  Martin Sander of the University of Bonn in Germany, one of the authors of the study on the finding published in the Journal of Vertebrate Paleontology. See the fossil:

According to a study published Thursday in the Journal of Vertebrate Paleontology, the fossils are from giant ichthyosaurs that roamed the world’s oceans at the end of the Triassic period over 200 million years ago. Among the findings is the largest ichthyosaur tooth ever discovered.

Researchers recovered the fossils in the Swiss Alps at an altitude of more than 9,000 feet. During the Triassic, though, those mountaintop rock layers made up the seafloor. P. Martin Sander, lead author of the study and professor at the University of Bonn, said the giant ichthyosaurs from the late Triassic were the size of today’s massive whales and were the earliest giant species, ahead of the long-necked dinosaurs and whales.

“The late Triassic lasted 35 million years. That’s half the time span since the dinosaurs went extinct, so it’s an awfully long time and the record from that time of ichthyosaurs is very scant,” Sander said in an interview. Except for some 45 to 50-foot ichthyosaur skeletons discovered in the Nevada desert and a 70-foot skeleton from British Columbia, Sander said “we have miserable coverage for what was among the most giant animals on Earth.”

Sander said the limited record makes any discovery of giant ichthyosaur fossils exciting. In this study, the researchers examined fossils from three ichthyosaurs recovered from three Swiss mountaintops. Sander’s colleague Heinz Furrer of the University of Zurich found these fossils from the late 1970’s until 1990.

At one site, Furrer found a tooth. Most of the giant ichthyosaurs previously found were like modern baleen whales and had no teeth at all. One ichthyosaur skull Sander previously studied was over six feet long and had teeth that were less than an inch in diameter. This new tooth is far bigger, at 2.36 inches in diameter.

Without the animal’s full skull, Sander said they cannot know with certainty how big the ichthyosaur was. Using the same skull-to-tooth scale from the other toothed ichthyosaur, this tooth would belong to an animal approximately 160 feet long — far larger than a blue whale.

Sander said this estimate is possibly “unreasonable” because they cannot assume the rate of growth for the skull and the tooth is the same. But the tooth almost certainly came from a very large ichthyosaur comparable in size to the blue whale, Sander said, pointing to jaw fossils from the United Kingdom that came from animals estimated at around 100 feet long.

At another site, the researchers found one vertebra and 10 ribs from an animal they estimate was the same size as the 70-foot-long specimen from British Columbia.

According to Sander, the discoveries bring paleontologists closer to understanding animals that were among the largest the planet has ever seen. He said as glaciers in the Alps recede due to climate change, it’s possible more fossils will be discovered.

“Nobody really knows much about these ichthyosaurs because their record is so bad, and they’re just ghosts,” Sander said. “Slowly, we’re filling in the ghosts. We’re coming to realize that there were three giants in the history of Earth and the ichthyosaurs’ claim to fame is that they were the first.”

Sander said further study could explore a likely extinction that wiped out the giant ichthyosaurs at the end of the Triassic while smaller ichthyosaurs lived on. He added that there is still much to be learned about the similarities between the ichthyosaurs and modern marine mammals.

“We have to look at all extinct things and say the whales did the same thing that the ichthyosaurs did first. And this is something you observe in dinosaurs — a lot of dinosaurs invented things that us mammals did later,” Sander said. “There are repeated runs of evolution and commonly you get the same or similar results.” 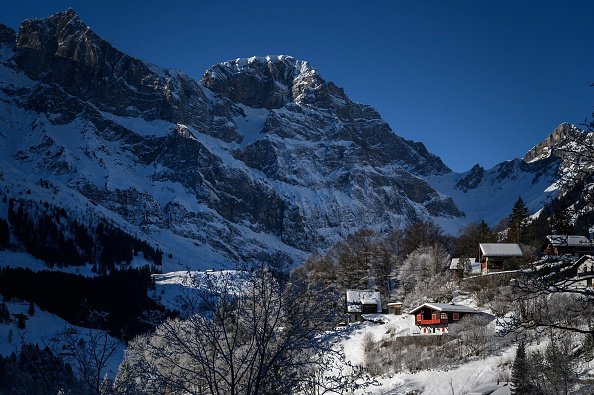 Ichthyosaurs inhabited the oceans at a time when dinosaurs were beginning to dominate the Earth. It was also a period of important geological transformations, with the movement of immense tectonic plates. “The Alps have a complex structure, with giant slabs of rock formed by material from the ancient sea floor, stacked on top of each other,” Sanders said.

The intense movement of tectonic plates explains how the fossils ended up on top of a mountain. The animal remains began to pile up at the site about 35 million years ago, according to the researchers.

Another intriguing fact haunts the history of fossils. They were found in the 1980s by Heinz Furrer, now a retired curator at the University of Zurich’s Paleontological Institute and Museum, and a group of young geology students at the time. But only now have fossils been studied and described scientifically. The delay still remains unexplained.