‘Believe all women except her’ Says Chris Rock about Amber Heard 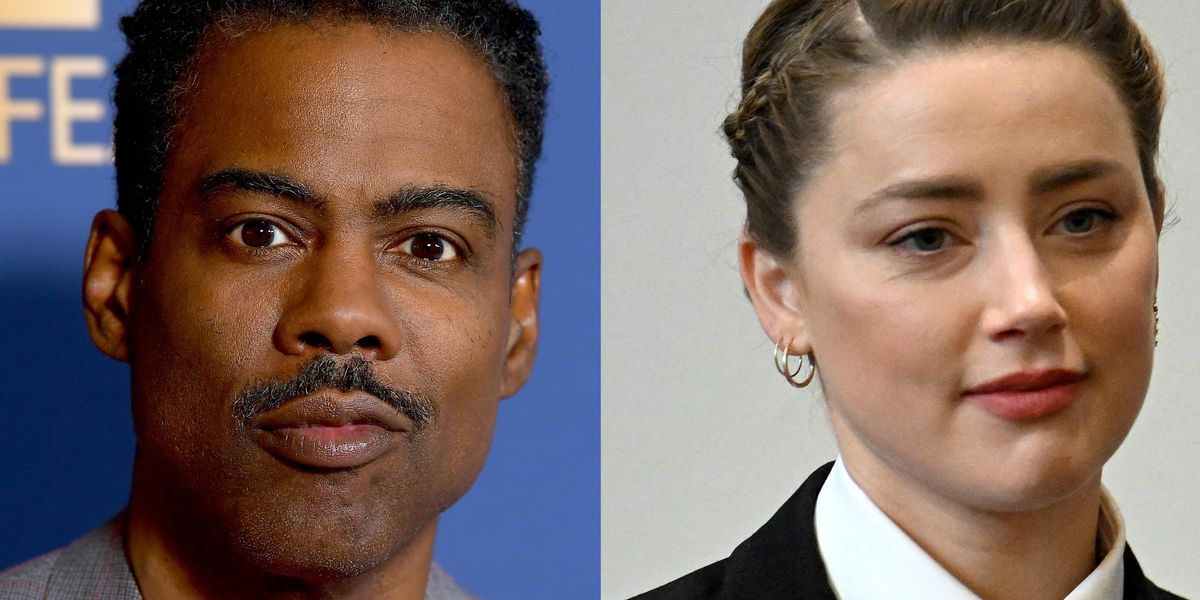 During a stand-up set, Chris Rock is said to have targeted Amber Heard, suggesting that we should “trust all women, except her.”

It comes as Heard is being sued for $50 million by Johnny Depp for claiming in a 2018 Washington Post op-ed that he assaulted her. Despite the fact that she did not name him, he argues that her charges have harmed his capacity to work.

Depp claimed he saw a snapshot of feces on his bed days after a confrontation with Heard, and Rock made particular reference to that incident.
He claimed his security officer showed him a photo of “our bed, and on my side of the bed was human feces, so I understood why it wasn’t a good time to go down.”

According to LadBible, Rock attacked Heard onstage in London this week as part of his Ego Death tour.

“Believe all women, believe all women… except Amber Heard,” Rock allegedly remarked. What exactly is she on? She defecated in his bed! She’s okay, but not s******* okay.

Amidst his ‘Ego Death Tour’, comedian Chris Rock traveled to Europe to perform at the Royal Albert Hall in London. During his show, he talked about the culture of cancellation and took the opportunity to make a joke about the subject of the moment: the legal dispute between the former couple of actors Johnny Depp and Amber Heard .

When talking about the new set of rules needed to engage with women while trying to have sex with them, Rock commented on Depp ‘s accusation that Heard had left feces in his bed .

Freedom of expression
On another occasion within his show, the comedian also spoke in a more serious tone about the siege against comedy and freedom of expression, speaking out against anyone who reacts violently to this art form just because they don’t like it. “Everyone is scared, you know… the whole world is scared of offending. So people are talking less.”

“People say you have to be careful because words hurt, words hurt… you know, anyone who ever said words hurt has never been punched in the face, they deserve our love and compassion. But if everyone claims to be a victim, so no one listens to the real victims.” During this year’s Oscars presentation, Chris Rock was punched in the face by Will Smith for a joke with his wife Jada Pinkett-Smith .

In a stand-up set, the actor allegedly attacked Heard.

“She defecated in his bed. You’re guilty of everything once you s**t in someone’s bed.
“She s**t in his bed. What the f**k is going on there? Wow. And they had a relationship after that.”

The details of Depp and Heard’s relationship have been laid bare to the public over the last month as the A-listers gave their testimony in court.

Heard finishes giving her evidence in the coming days, with new witnesses are expected to take to the stand which include Heard’s sister Whitney Henriquez and Depp’s ex-girlfriend and co-star Ellen Barkin.

Indy100 has reached out to Rock’s representatives for comment.

‘When you s*** in somebody’s bed, you only at real fault for everything. What the f*** is happening there? Goodness. Furthermore, they had a relationship after that.’

Rock was riffing on the declaration of Depp’s driver and safety officer, Starling Jenkins III, who in court on April 28 said that Heard had left ‘an amazement’ in her and Depp’s bed after a battle in 2016.

Jenkins affirmed that while he was driving Heard to the Coachella celebration California, Heard let him know that the poop was a ‘horrendous reasonable joke turned out badly.’

Golden Heard shows up in court in Virginia on April 21. The blockbuster preliminary has been on a break for as far back as week and is expected to restart tomorrow

Depp affirmed that he was shown photographs of the bed, and said that there was nothing left but to giggle at Heard’s ‘peculiar’ conduct.

‘He showed me a photo on his phone of, it was a photo of our bed, and on my side of the bed, was human feces,’ Depp said, ‘It was so strange thus abnormal that I could snicker.’

After Depp stormed out of their Los Angeles apartment following a furious argument, the couple’s cleaner allegedly discovered excrement on the sheets.

The defamation trial between Depp and Heard has been put on hold for a week and will resume in Virginia tomorrow.

Share
Facebook
Twitter
Pinterest
WhatsApp
Previous articleElon Musk’s Elder Ring build revealed and it’s turning heads
Next articleAmber Heard is described by Johnny Depp’s friends as a “sociopath show pony” who is used to always getting what she wants.