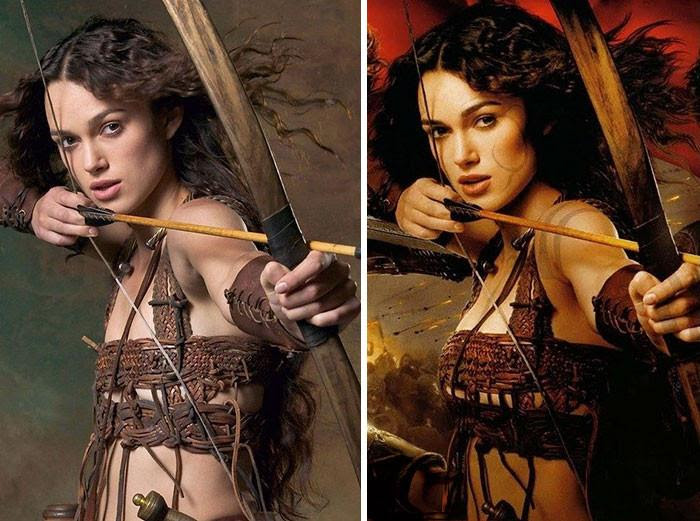 Celebrities’ appearances have always been altered by magazines, whether they are singers, actors, actresses, or other well-known people. Even before Photoshop, the magazine and media industries*se partnered with a number of celebrities to meticulously offer photo-shopped images that shaped the viewers’ mind. However, the people could not ignore the discrepancies.

Anyone may now modify their appearance in images with a single click thanks to contemporary technology. However, for many people, this has become a major concern since they believe that this conduct promotes unattainable beauty standards that are practically impossible to fulfill, particularly among young women.

Celebrities often photoshop a big section of their photos while publishing them on social media, and such changed photographs are becoming increasingly popular in the advertising sector. Such strange manipulation is sometimes fairly clear, and celebrities themselves have strong reactions to it. The Photo-shop option may virtually eliminate any hump or bulge on a person’s physique, as well as accentuate every shine and twinkle.

We need to remember that pictures can be deceiving and these celebrities are human beings as well, with the same ‘flaws and imperfections as us.

Check out these worst celebrity “Photoshop fails” of all time and let us know your favorite one!

Growing up, we all had a massive crush on this Hollywood beauty, and why wouldn’t we? She’s absolutely gorgeous! But not everyone thinks so, as Hollywood always has other plans when it comes to portraying unrealistic beauty standards. Jennifer Lawrence has been quite vocal about spreading body positivity in the past and confessed again and again that she doesn’t want to be photo-shopped.

When Keira Knightley got the role in King Arther, she trained aggressively to lose those extra pounds to transform her body for her role in the movie. She shed a prominent amount of weight, her neck got lengthened, and her bust almost disappeared. However, in the promotional posters of the film, Hollywood enhanced her bust to match our society’s standards.
Ferge

The 43-year-old icon has been in the entertainment industry for as long as she can remember and she revealed that trying to fit in the industry at such a small age led her to a crystal methamphetamine addiction growing up. Considering all the hardships this queen had to go through, she still looks absolutely stunning, even without Photoshop.

In these before and after images, you can clearly see that they have Photoshopped Faith Hill’s reasonable wrinkles, fine lines, elongated her face, and even fixed her earlobe. The main thing is that the un-touched image is utterly stunning and very realistic for women her age.

This one wasn’t the fault of any magazine or advertising company, Lindsay Lohan posted these pictures herself. She uploaded these poorly photoshopped images and anyone who owns a pair of eyes can tell that the after image is fake. Substance abuse has taken a massive toll on this Hollywood star and it’s a good lesson for all those vulnerable teens to stay away from drugs.

Singer/Songwriter Miley Cyrus has been in the limelight for quite some time now and is no stranger to controversies, and being exposed. Without a doubt, Miley is a gorgeous actress, singer, and model, but even such beauty can’t stop Photoshop.

Miranda Kerr might be one of the most beautiful Victoria’s Secret Models out there but that didn’t stop someone from airbrushing those minor to none flaws on her face. This supermodel is only 35-years-old and clearly needs no Photoshop.

You know how some people are scared to show their teeth in pictures, worrying what others might think of them. Well, a smile is a sacred thing and should be cherished. However, our entertainment industry has different plans for Kristen Steward who apparently can’t even show her teeth freely in photographs.

Let it be known that no matter how famous you are, you are not safe from being digitally altered at any time. Avril Lavigne is quite famous for her punk rock and bad girl appearance in the pop scene, but her gorgeous hair wasn’t straight enough or her skin wasn’t smooth enough to be featured in this cover photo apparently.
Sharon Stone

The ‘Basic Instinct’ *sex icon is now 60-years-old and it is safe to say that she is still so effortlessly beautiful than ever. This might not actually be the ‘worst’ celebrity Photoshop fail because these before and after images depict how the realistic version of a person can be 100 times better than the edited one.

The famous Kardashian girl, Kim has been very*brutally vocal about digital photoshopping of images in the past, and thus, people had a lot to say when these re-touched photographs were released by Complex Magazine a few years back. Kim Kardashian posted the unedited version and said that she doesn’t care if she has a little cellulite, because quite frankly, what curvy girl doesn’t?
Zendaya:

In an interview, model and actress Zendaya (who got her to start on Disney’s Shake It Up) noted that she was surprised to see her body become overly altered for a 2015 photoshoot for Modeliste Magazine. “Had a new shoot come out today and was shocked when I found my 19-year-old hips and torso quite manipulated,” she wrote in the post, published on Instagram on July 2, 2015.

Paltrow wore a dress designed by Anthony Vaccarello. She shared her un-retouched Vanity Fair photo on Instagram and seemed to be pulling at the hem of her dress around one of her legs, but the position that leg appeared to be in was incorrect when comparing the original photo.

In another “Pretty Little Liars” ad, one actress seemed to be missing a leg.

Actress Sasha Pieterse suffered a meltdown when her own leg suddenly disappeared, only to be replaced with an artificial one.

The photographer did not do a good job of capturing the definition of William’s face, highlighting his receding hairline. The way this model is posed makes it appear that he has less hair than the cover suggests, which may have been corrected digitally or with additional photo manipulation to bring out more detail in his face so it looked thicker than what was indicated by the original photograph. Additionally, while William usually is noted for having blonde-ish hair, in this image he appears to have brown hair because of how his hair color was changed and skillfully applied to make for a better visual expression than originally illustrated by the photographer.

The highly recognized fashion magazine digitally shed a few pounds off of Clarkson just to enhance her look and present it in the best possible way. In a statement from Clarkson that was published on the same page, Clarkson went on record as saying that she was comfortable with her weight and did not have any problems with it. Although she is no longer at her personal best, due to the nature of this digital lightweight picture editing, we can see that there is still something left to be desired before one would arrive at the ideal goal weight by weighing less than Clarkson’s current image which currently weighs in at 125 lbs. This was stated by editor-in-chief Lucy Danziger who said “I am so excited to share [Clarkson]’s ‘personal best’ photos in People.”

Critics have attacked the magazine saying that they were trying to make him look darker in order to exaggerate his skin color. Compare it, for example, to a Newsweek cover from the same time with the same photo. In comparison Time’s photo looks much worse because of their unnecessary retouching.

Celebrities like Kris Jenner and Gordon Ramsay have also been called out for Photoshop. See the first photo below (which was taken by Gordon Ramsay himself in Instagram) and then the next one is Kris Jenner’s version of the same picture on her own private Instagram account.

Magazine design makes or breaks an awesome actress. Nyong’o posted unedited pictures on Instagram that revealed “Allure” took off some of her hair and smoothed out the rest. The magazine later apologized for publishing a modified image.